Earlier in the season Newcastle went to White Hart Lane and came away with a narrow, 0-1, victory over Spurs thanks to one of the best goalkeeping displays of this season from Tim Krul. In a cruel twist of fate for Newcastle and Krul, three of the four goals came from deflected shots or crosses by Krul’s hands that fell favorably to a Spurs player and found the back of the net. The fourth and final goal from Nacer Chadli needed no such assistance as he hit a picture perfect ball into the left side of Krul’s goal with a shot from outside the area.

There was a bit of confusion before the match as to how Spurs were going to lineup. Tim Sherwood named Moussa Dembele, Paulinho, Etienne Capoue and Nabil Bentaleb among the starters, a quartet of central midfield players, along with Adebayor up top and Aaron Lennon wide out somewhere, right or left. All that really was not known was who would be fielded in a wide position opposite Lennon, it has been common to see either Nacer Chadli or Christian Eriksen fielded wide left recently but with both rested, no one was sure who would take the spot. As it turned out, Dembele played wide on the right and Lennon was wide on the left and with Capoue fielded from the start Tottenham looked to play a 4-1-4-1/4-3-3.

Alan Pardew in a twist to several recent Spurs’ match day narratives, decided to go 4-4-2 and cede the midfield possession battle to Spurs’ three man midfield. The first half then followed along in much the way you would expect two teams lining up this way to go, only this time, it was Spurs controlling the central areas. Tottenham saw 58% of the possession in the first half and completed 83% percent of their passes, where as Newcastle completed only 72% and Spurs attempted nearly double(84) the amount of passes in their attacking third as Newcastle(45) did.

Despite owning more possession and working in Newcastle’s defensive third with almost a third of their passes the teams went into half time having both put two shots on target and Newcastle had seven total shots to Spurs six. The difference in the scoreline was thanks to a fantastic passing sequence from Spurs that saw them beat Newcastle’s pressing, move the ball out to the left flank where Bentaleb worked in a low slung cross across the face of goal that Krul had to try and parry to protect his far post. In doing so however, the deflection fell right to Adebayor who happily popped into the net and put Spurs on top inside twenty minutes.

Tottenham were lucky not be chasing an equalizer at that point as only a smart save from close range from Hugo Lloris kept Newcastle from getting the opener in just the eighth minute on a poorly defended free kick. Spurs caused themselves further alarm throughout the first half with turnovers inside their own half from either poor passes or getting caught in possession and coughing the ball up. On twenty-six minutes Spurs turned it over near the half line and Newcastle wasted little time, hit a ball up to Cisse, one of Newcastle’s two forwards, and forced Lloris to come to the top of the area and put Cisse off enough to force a poor attempt at chipping him. Spurs were lucky not to be caught out earlier with an absurdly dangerous square ball across Spurs own half from Kyle Naughton, playing at leftback.

Near to the half, Spurs were caught leaving too much space between the backline and midfield when Moussa Cissoko cut in from the left, played a pass into Cisse who then laid it back off for Cissoko to have a free shot on goal from inside the ‘D’ that Spurs were happy to see sail wide of the target. A few minutes later, Newcastle broke again but Cisse was driven wide by Younes Kaboul who made a solid tackle and took the chance away from Cisse. That was the eb and flow of the first half, Spurs had more of the ball and looked threatening with solid buildup and approach play but also gifted Newcastle chances to counter with some sloppy play. 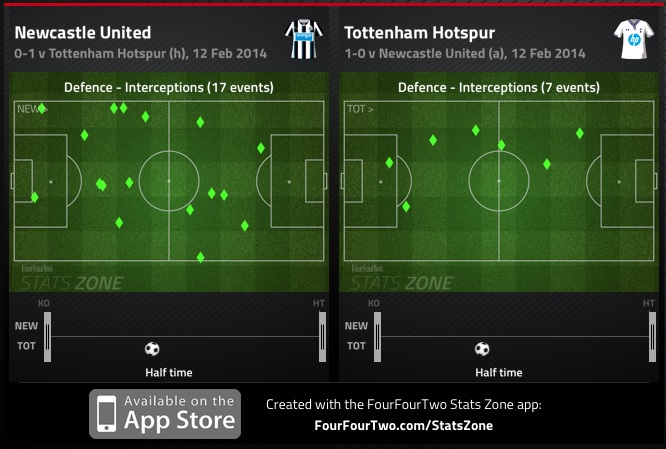 When Newcastle where left to build up from their own half they were poor, both Paulinho and Bentaleb pressed high up the pitch against Newcastle’s backline, joining with Adebayor to force Newcastle long. By pressing from the middle Spurs allowed Lennon and Dembele to drop back and work with their fullback to protect the flanks, leaving Newcastle with little else but long balls forward as the only option and here Spurs were ready to deal with two up top as Capoue was positioned in the holding role to keep a constant 3v2 in Spurs favor. Either he would make challenges in between the lines or drop into the back four himself if either Kaboul or Vertonghen stepped out. Capoue showed the qualities that have been lacking from Tottenham’s other midfield players in actually performing the holding midfielder’s duties, not just taking up the position on the team sheet.

Newcastle made a change at the half, removing their leftback, Davide Santon, for Paul Dummett in a like for like swap. Santon was probably all too happy to come off as Dembele and Kyle Walker took turns getting the best of him down Spurs right. Dembele beat Santon and nearly created a chance for Spurs just five minutes in and Dembele and Walker were able to work in five crosses, four from close range just wide right of the area down their flank in the first half. It didn’t take long for Spurs to add the second, on fifty-three minutes Bentaleb hit a forward pass into Paulinho’s feet inside the area who laid it off for Adebayor to shoot from top of the box, Krul saved but could not catch the shot and Paulinho followed up the shot and buried it for a goal.

That exchange best characterized the work from Adebayor, Bentaleb and Paulinho as all three could be found at times to be highest up the pitch of the three, Paulinho was happy to hold the line when Adebayor dropped deeped and it kept Tottenham from stagnating in possession with the three moving into and out of each others spaces well. The three  also pressed excellently together in much the same way, each willing to be the furthest forward, in the first half.

After the second goal, Pardew went to his bench and brought on his dangerous number ten, Hatem Ben Arfa, in place of Luuk de Jong and Newcastle went 4-2-3-1. At the same time, perhaps sensing Newcastle would now have more possession and chasing the game, Sherwood brought on Andros Townsend for Dembele. A simple and smart move, Spurs would be better able to hit on the counter with pace on either side of the pitch between Townsend and Lennon.

From the time of Spurs second goal, Spurs took their foot off the gas for a good twenty minutes and sat deeper, put Newcastle under less pressure, ceded possession and didn’t look a threat to go for a third much at all. It’s understandable why, Newcastle had lost five of six, have little to play for and had been shutout in their previous two matches. It’s no surprise to think Spurs thought it was job done and they had the points in the bag and it was time to go home. Pardew however made two further substitutions and Arfa lofted in a wonderful cross that found Mathieu Debuchy inside the area who headed on goal from point blank range and only an excellent save from Lloris kept it 0-2 in favor of Spurs.

In the twenty minutes between Spurs second and Debuchy’s header Krul had literally nothing to do and Newcastle had four shots, two saved, one blocked, four corners and put seven crosses into Spurs area. Shortly after, Nacer Chadli came on in place of Lennon and Spurs came back into it the match, adding Adebayor’s second and then Chadli’s beautiful goal in the final ten minutes of regular time and headed for the bus 4-0 winners.

By matches end Newcastle managed to get the possession battle back to 50/50 and had thirteen attempts to Spurs fifteen. They were able to exert pressure on both Lloris and Vertonghen who had poor passing displays and had a twenty minute spell where they looked like they might get back into it but they were reliant on Spurs making mistakes in possession to really benefit from their initial 4-4-2 setup. Once Tottenham settled down in possession those chances went away for Newcastle as Tottenham put in a solid defensive performance.

Capoue showed his full value being allowed to play his preferred role for a full match, he was where he needed to be almost all of the time. He did well in screening the back four, particularly in protecting the centerbacks and filled in whenever a defender was caught out. He made four successful tackles and recovered possession a team high nine times. His effectiveness in the holding role freed Bentaleb of the defensive role he has struggled to play and with Paulinho and Adebayor working in the middle with him he was free to play the role it was suggested here he would shine the best in, the “in between” midfield role. Not being asked to be the main creator from midfield nor being asked to be the defensive rock, Bentaleb was only asked to assist the specialists. And that he did.

Bentaleb played 46 of 52 passes successfully, an 88% completion rate, assisted Chadli’s goal, put in the cross deflected by Krul for Adebayor’s opener and found Paulinho in the box who laid off to Adebayor who’s shot Krul couldn’t handle and Paulinho put away. He did a solid job defensively as well, as mentioned he pressed well with Paulinho from the middle, made four tackles and recovered possession eight times. It was a man of the match performance.

The win gives Spurs the best away record in the league, a positive goal difference again(+4) and kept them safely in front of Manchester United and right on the heels of Liverpool in what is now, another Spurs race for fourth spot. The move to put Dembele out wide seemed strange at first, but it came off, his ability to challenge defenders on the dribble is well noted but can sometimes be wasted around the center circle, much less wasted however taking on opponent’s fullbacks where a successful take on can very quickly create problems. The other highlights were Kaboul’s return and very effective play and that Sherwood finally, finally, fielded a true holding midfielder in a three man midfield. And the move to the 4-1-4-1/4-3-3 came off perfectly, aside from needing a few more brilliant interventions from Lloris, let’s hope Sherwood sticks with this.

Thanks for checking out what’s posted here!

Coaches sharing their ideas helps us all to improve and hopefully there’s something here for anyone who coaches, plays or just enjoys soccer!

If you enjoyed some of what you've read here, consider a contribution to help me offset the cost of keeping the site up!