Books not about Soccer, for Soccer Coaches

With winter settling in across large portions of the US, many soccer coaches find themselves in a lighter period of their coaching calendar. It’s a great time to plan for the spring season, catch up on a back log of DVR’d pro level games from the fall, do some writing(if that’s your thing), relax, remember what a social life feels like(not that all of us have one) and, hopefully, set aside time to read.

Soccer coaches have an endless amount of soccer specific books to choose from that cover every aspect of the sport. Biographies and autobiographies of many top coaches and players, histories of teams, leagues and soccer nations, and a mind numbing amount of coaching manuals. Many of these books are great for their information, stories and inspiration. 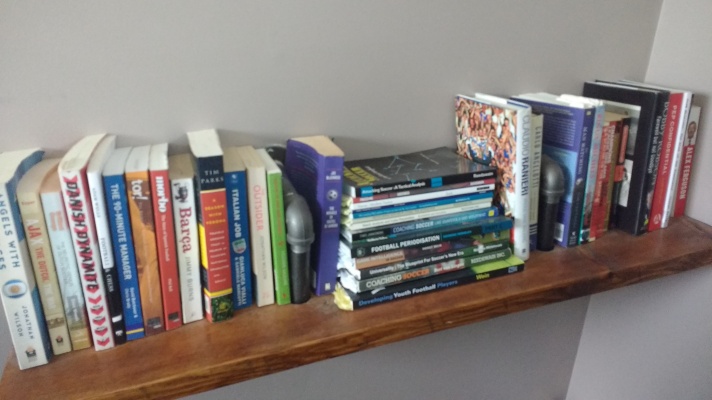 What about though, books that could be of benefit to soccer coaches that aren’t about soccer? Many coaches take inspiration from sports other than the one they coach and being a good leader, manager, role model, co-worker, or innovator transcends all walks of life. The most important aspects of being a good coach are how you relate to, influence, teach, cooperate, lead and manage the people around you. The more your players and their parents trust you and believe your committed to helping them, the more success the groups and individuals you work with will have.

The better you can function in either running or being part of a staff is critical to advancing your career as well, a good coach can get derailed by off field matters just as, if not more, easily than on field issues. You might be a great coach, but you also need to be effective at far more than that to be successful, especially at youth level.

A few years ago I took some good advice from a coach much further along in his career than I, he told me to move away from coaching manuals and start to read more about leaders, coaches specifically, and that I would learn more about being a good coach by learning how to lead than learning 100 different variations of how to run training sessions. I also used to work at a cafe early in my coaching career and the owner always told me someday I might it find it useful to consider a book not about soccer. After reading nearly fifty books in seven years about soccer, I thought maybe he was right.

This year I achieved more balance in the variety of my reading as more than half the books I read were not about soccer. Below are the ones I enjoyed the most and how they might help in your career in soccer. I’ve provided a link as well to each, some are harder to find than others!

Herb Brooks: The Story of a Hockey Mastermind

Not a massive jumping off point to go from books about soccer coaches to a book about a hockey coach. The objective of both games being to move an object into a goal protected by a goalkeeper, after all. And for soccer coaches who spend their winters at indoor facilities playing 6v6 on boarded fields, the differences between the two sports become even less pronounced.

This book by John Gilbert, written in 2010, is a superb insight into the career of Herb Brooks, who led the 1980 US Men’s Hockey team to an Olympic Gold Medal. This feat is commonly referred to as “the Miracle on Ice” and is one of the most legendary stories in all of sport. Brooks previously coached at the University of Minnesota, where he won three NCAA National Championships. After his success at the 1980 Olympics, Brooks struggled to make his mark at the pro level with parts of seven NHL seasons in which his team never got past the second round of the playoffs.

Brooks was a rebel in US hockey culture for nearly all of his career. He implemented elements of the Soviet/European style successfully at both Minnesota and the US team, a complicated system in stark contrast to the Canadian system of play popular during his career. Brooks was also outspoken in the media and left a legacy of “Brooksisms” among the players he coached. These Brooksisms included some great ones such as:

Brooks peaked in 1980, the same year another outspoken coach with plenty of catch phrases of his own reached his peak, Brian Clough. The two had much in common beyond their personalities. They both believed in a different way of playing to what was preferred in their respective sport and countries at that time, Clough wanted the ball played on the ground and played with intelligently, Brooks wanted intricate attacking moves and slick passing.

Both men had incredible success in the 1970s, peaked with unbelievable accomplishments in 1980, and stayed in the game with more muted success afterwards. Both also overcame unfulfilling playing careers, Brooks was the last player cut before finalizing the 1960 US Men’s Hockey team roster that won an Olympic Gold, Clough’s playing career ended with an injury suffered on Boxing Day in 1962. Brooks passed away in 2003 at the age of 66, Clough a year later at the age of 69.

The book itself goes deeply into Brooks’ methodology and centers much of it’s pages on inside looks at the success with Minnesota and a detailed description of the Gold Medal campaign. It’s a wonderful companion book with the movie “Miracle” which chronicles the US Men’s Olympic success, it references parts from the movie that were spot on or played up for the movie.

The author, Gilbert, covered much of Brooks’ career and knew him about as good as anyone else. So much so that Gilbert predicted the roster after tryouts for the Olympic team perfectly, including naming a player he was going to take but decided to leave him in college to call up before the Games. Brooks reaction, “You son of a bitch, that’s exactly what I plan to do.”

If you see yourself as a coach going against the grain of what’s popular and accepted in your soccer world, the story of Herb Books’ bold, outspoken, rebellious and successful career is a great source of inspiration.

Viktor Frankl’s Man’s Search for Meaning is a complete departure then from soccer and sport. Frankl was an Austrian neurologist, psychiatrist and Holocaust survivor. This is Frankl’s best selling book and chronicles his time in the camps as well as introducing his school of psychotherapy known as logotherapy.

Frankl believed having a meaning to one’s life is the most powerful, motivating and driving force in humans. He attributes his own Holocaust survival to his belief his life had a purpose to it, publishing his ideas, that he must then survive the camps for this to happen. Frankl notes that the rate of death in the camps would spike dramatically every year after Christmas, his reasoning being the prisoners convinced themselves each year the Allies would arrive by Christmas. When they did not, many of them then lost the will to live and passed away shortly after.

It’s certainly not light reading, however, it does put one’s own life into perspective and can lead to productive time spent thinking about the purpose of your life and how finding a purpose for your existence can lead to a happier, longer, meaningful life.

This one might be more useful for those coaches also in directors positions at the Clubs they work for. Chris Whipple chronicles the history of one of the most unique and challenging jobs in the world, the White House Chief of Staff, from the origins of the position right through to the conclusion of Barack Obama’s second term. It’s a great book for those with an interest in politics, yes, and it also provides insight from nearly every Chief of Staff going back to H.R. Haldeman under Richard Nixon.

Whipple does an excellent job highlighting what each Chief got right and wrong, their different leadership styles, and how they influenced the success and the failures of each administration they ran. It’s a wealth of inspiration for being a successful manager, leader and how to navigate complicated inter-office issues and controversies. Anyone managing a staff of coaches would be well advised to read this book.

Buck Up, Suck Up and Come back when you Foul Up

If you ever wanted the perfect example of not judging a book by it’s cover, this is that book. The title of the book is far too long, the cover has an incredibly unflattering picture of it’s authors and looks like a typical self-help book, of which thousands and thousands there are to choose from. But if you get past the cover, you only need to look at the table of contents to immediately think it might actually be worth taking some time to read: 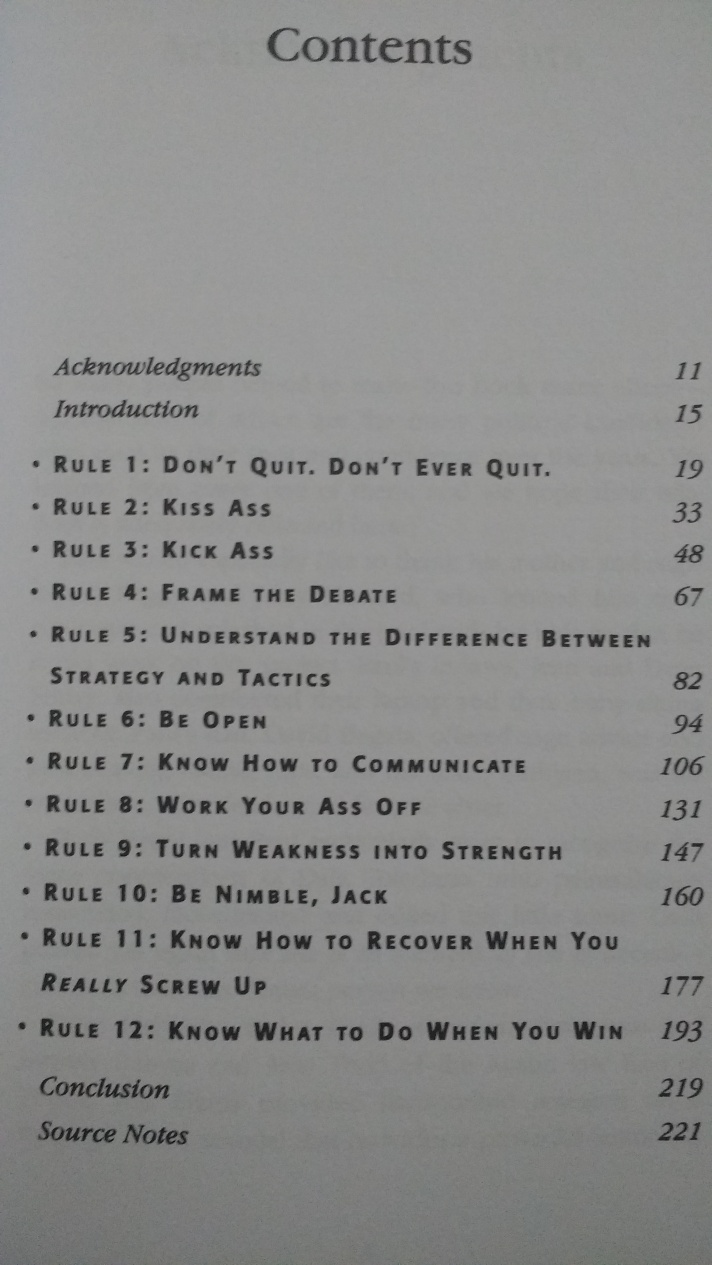 The authors, James Carville and Paul Begala, pass on their best practices from their successful political careers in 12 chapters, each focused on how you the individual can be sure to bring more success to your own career. The chapters are short and easy to read and with there being 12 of them, it would serve you well to pick it up once a month and read a chapter.

For a soccer coach, there’s plenty here to help you tackle everything you come across off the field, how to manage your time, how to stay on topic, how to focus your arguments, stand up for yourself and more. All topics covered in many, many books but I found the advice within to be thought provoking and have put much of it to good use in the short amount of time that’s passed since reading it. It guides you to know when to be assertive, when to be open, when to apologize, it gives a well rounded look at the what, why and when of every topic discussed with examples from their own experience in politics.

All four of these books were entertaining to read and I find myself referring to them in conversations with fellow coaches quite often, more often than many of the soccer specific books I’ve read. It’s been well taken advice to branch out in my reading selections as I’ve been able to link much in these books back to my own career in soccer. And that’s really the key, finding the parallels in any experience to your own experience is an effective learning tool and can lead to leaps and bounds of personal growth.

Thanks for checking out what’s posted here!

Coaches sharing their ideas helps us all to improve and hopefully there’s something here for anyone who coaches, plays or just enjoys soccer!

If you enjoyed some of what you've read here, consider a contribution to help me offset the cost of keeping the site up!