AS Roma in Boston 7/24 Training Session

As part of their preseason preparations, AS Roma is spending nearly two weeks in the United States. In what seems like an interesting twist on the usual big European Club comes to America for preseason tour for the benefits of promoting the Club at the expense of the team’s preseason training, they are spending July 24 through the 30th in Boston for training only. No matches, at least not officially, before heading off elsewhere for their now annual friendly against Liverpool in the We’re Both Owned By Americans Derby.

It must be some sort of relief to Luciano Spalletti and his staff to at least get a solid week of training with no flying. As we’ve seen already this preseason, Jose Mourinho is none to pleased with how Manchester United’s trip to Asia has gone thus far and you can imagine most managers loathe these preseason trips that are done mostly for the purposes of growing the brand of the Club. That is the norm now for top European sides.

Anyways, onto the session itself. This session took place at 5:30pm local time on Roma’s first full day in Boston. According to the Club’s social media they had done strength/gym training that morning and this would seemingly be their only soccer-specific session of the day. The session lasted about two hours and was at Harvard University’s Ohiri Field.

The session began with the full group, short of the goalkeepers who had begun earlier, doing a short dynamic warm-up. It seemed very abrupt, it was at most fifteen minutes, if that.

Normally, by which normal means what one usually would see watching most training sessions available on YouTube, these sessions start off with unopposed work and/or work with the group split up by positions and some sort of small sided game(rondo).

The exercise began with a long ball played into the area in the direction of the center forward from a goalkeeper. The purpose was to keep possession in the area until a through ball could played out of the area to meet a run beyond the area and then finish in one of the small goals, shooting from behind the dotted line. With the incredibly tight spacing from 20 players in roughly a 45×45 yard area the ability to have enough time on the ball to play an accurate through ball with a correctly timed run was hard to pull off.

The progression to this game was relatively simple. The small goals were removed and the full sized goals, now defended with a goalkeeper, were moved to the top of the penalty area. The playing areas was now the same length but the width was extended out to the touchline. The only option to get behind the defense and have a shot on goal remained the same from the previous game. There were no crosses put in from wide and dribbling out of the playing area was, seemingly, not an option either.

The emphasis, and with the session being done in Italian it could be slightly different, was on quick combination play and fast transitions in order to play promising through balls in behind the defense. Most of the runs came from the wingers(both sides were playing a 4-3-3) but there were also fullbacks pushing high when wingers came inside and center mids making runs beyond the center forward. Edin Dzeko made some runs behind for one team, while otherwise holding the ball up, and Totti drifted around looking for space(and usually found it) and played others in behind.

The final progression extended to the playing area being slightly narrower than the full width of the field but stretched the length from the top of one penalty area to the other. It was more or less an unrestricted game of 11v11 at this point and naturally as would be expected, the players carried on in trying to play in the same manner in which they had been previously with the various restrictions in place.

With the space on the field opening up and the goals at the tops of the penalty areas the play opened up quite a bit as space was no longer at such a premium and both sides created chances and moved the ball effectively, again, in the manner in which it appeared they had been asked before. Spalletti made no stops during play in any of these games. He did walk freely in among the play(less so when the space was tigher) and was constantly providing instructions. He did speak to the group before resuming the next progression after a water break but he did not stop play at any point.

After the group had worked together through the warm-up and game exercises they split into two groups. Again, you would probably expect the opposite, that the full group would train after training in groups. It will be interesting to see(work allowing!) if this pattern is usual for Spalletti or just a one off given the nature of this session having just arrived here.

The forwards and midfielders worked on finishing on goal. It was a simple setup, three quick passes were played 25 yards out and then a one touch pass was played over the top of several plastic men to a striker running in on a full goal and looking to score past a keeper.

The defenders trained in two opposing back fours(later adding a holding midfielder as neutral player) on body shape, shifting side to side and pressure, cover balance when a fullback stepped to put pressure on the ball holder. This looked to be boring, tedious, work but the sharpness of movement, maintaining the correct body shape and later the speed of moving the ball along the backline was impressive. Certainly what you would expect from professionals even if you can imagine they’ve done similar work plenty of times before and can’t enjoy it much. 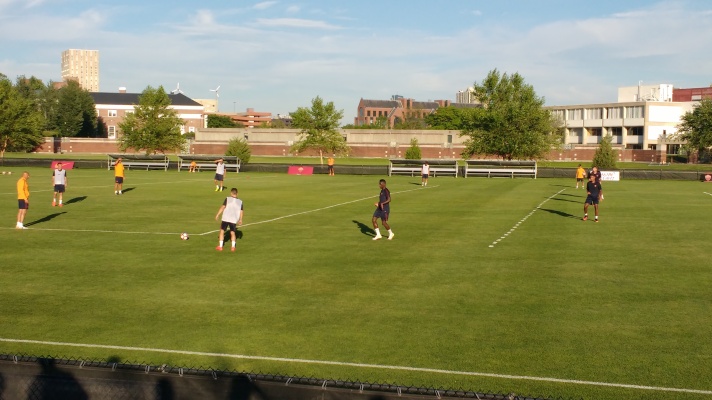 While that was going on a group of four players were doing some jogging/running on the far side of the pitch for a short while. It looked to be some players who had played in the European Championships(although Alessandro Florenzi was not one of them) including Daniele De Rossi and Radja Nainggolan. This group finished and left early.

The session wrapped up after this and all told the players were on the training ground for about two hours.

Aside from the obvious technical quality of a top European squad, it was interesting to see how Spalletti coached during the session, the seemingly quick warm-up and the approach of having the full group train together first and progress up to an 11v11 game and then go back and do work in smaller groups. Might be a training method worth trying out.

There was a good crowd on hand even with the Club only announcing that afternoon that the session was on at 5:30 and open to the public. It was originally to be a closed session. Who would be spying on an AS Roma session in Boston on a Sunday afternoon is anyone’s guess! But having closed sessions is probably normal enough at this level. Even Italy’s last national team manager, Antiono Conte, went so far as to ban members of his own staff from certain training sessions during the Euros.

Last bit to make note of, only Alessandro Florenzi came over for autographs and selfies after the session. Much to his own surprise as he flailed his arms out and pointed back in the direction of the supporters after he walked back over to the remaining players and staff. Evidently he felt a few other players should have gone and joined him but he was at least happy to sign and smile for selfies for a bit before heading off.

AS Roma will be at Harvard all week with many sessions open to the public. Definitely worth taking in if you’re in the area.

Thoughts, observations and methodologies from an American soccer coach, in an endless effort to better understand and teach the world’s game.